As with  many of the Farrell Clan  stalwarts, it is hard to know where to begin or how to explain the wealth and breath of community contribution that Harry Farrell and his wife Eileen made to their home town of Longford.

Eileen Farrell (nee Cassidy) was born and raised in Longford town. Her mother was from Richmond Street and her father from Edinburgh. Interestingly her mothers maiden name was also Farrell before she  married into the Cassidy family.  Her mother had worked in Jurys Hotel and her father was a confectioner whose job was based in Edinburgh, Scotland. While Eileens mum had spent some time living in Scotland she missed her hometown of Longford and so moved back here to raise her family. Her father retained his job in Scotland commuting between the two places until his retirement. The couple had a family of three daughters, Mary, Fran and Eileen.

Eileen attended primary school at the Convent of Mercy and thereafter the Vocational School on the Battery Road in Longford town. She later worked as a waitress in the Longford Arms Hotel, as well as the old QuinnsWorth Store as a retail assistant. She was a very capable employee with keen mathematical abilities and a naturally hospitable nature. 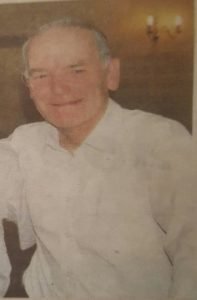 Harry grew up on the Park Road in Longford town. His parents Ned and Mary Jane Farrell had a family of four children, Eamon, James, Harry and Ann.

They were a hard working couple, doing everything they could to ensure a bright future for their family. The fact they were both involved in the Longford Leader, as was Neds father before him, paved the way for Harry to follow in their footsteps. Three generations of the same family working for their local paper, also founded by the late JP Farrell. Now that’s an interesting family tradition.

Harry started working at the Newspaper when he was just fifteen years old. He trained into the job, began as a printer and then in later years also became more involved in the journalism side of the company. He remained with the Longford Leader for fifty years until his retirement in 2007.

Harry and Eileen met at a showband dance. They both enjoyed the music, attending the Sunday night dancing in the Longford Arms every weekend. They got married in 1965 and had a family of four children, three boys and one girl, Eamon, Kevin, Noel and Mary.

While Eileen was kept busy working at home raising their children, Harry became more involved with the Newspaper and the community life of the town. The couple made a tremendously impressive Farrell team, supporting each other in their interests and ambitions down through the years. 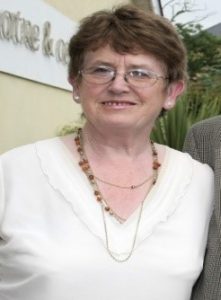 Eileen always ensured she was updated on what was happening in the town and county. She kept a keen eye on the County Councils development of the area and was quick to point out the pertinent issues facing the town. She was very interested in Tourism, visiting the Tourism Office quite regularly to check in and chat about what was being planned for the year ahead. She would often sit for a while discussing her opinions on what needed to happen in order for the fortunes of the town to be turned around.

She also worked part time for forty three years at the Greyhound Stadium on the park road, right across from her home. There was a long standing joke between her and Harry about this job as they both applied for it at the time, she winning the position due to her better mathematical skills.

Harry was immersed in the community life of the town, always looking for ways in which to bring new life to it. His name is synonymous with the County Longford Community Games, of which he was a founder member and first PRO. He also set up the Irish German Friendship Circle in 1978 along with Philo Kelly MCC, acting as first Chairman of the forum. This organisation was a precursor to the successful town twinning which took place in later years. He was involved with the first aid group in the town and a founding member of the County Longford branch of the Irish Kidney Association for whom he acted as PRO.

He was a member of Longford Historical society, Longford Genealogy Society and most importantly for the Farrell Clan, he acted as PRO and researcher, working tirelessly in the promotion of the clan both at home and abroad. Harry and Eileen joined the clan in 1992. They were committed members of the Clan, always involved in the activities of the clan rallies. Harrys interest in history and genealogy saw him compile a tremendous amount of data in relation to the Farrell Clan members around the world. He was responsible for the Clan Newsletters which are now a rich source of information for researchers and students of Farrell and indeed Longford history.  As an employee of the Longford Leader he had wonderful influence within the media which helped create many opportunities and new connections between individuals and groups around the world.

Always interested in sport, Harry played with Longford Town Soccer Club in his youth. One of the last projects he was involved in before his passing was the establishment of an over 55’s Badminton Club in the Mall Complex. Eileen continued with this project after his passing, acting as Chairperson for the club and developing it into a successful group.

Additional to all of his voluntary and community work Harry still found time to write a book entitled ‘Exploring Family Origins and Old Longford Town’, and had another unfinished book on Ballymcormack Cemetery underway before his passing, a task his daughter Mary hopes to complete in his stead.

Harry was a man known for his enthusiasm, wit and intelligence, Eileen for her kindness and soft spoken ways, both for their pride in Longford.  Much like the other Farrell clan members they gave freely of their time, asking nothing in return, a trait which seems to run deep in Farrell blood.