Whenever Joe Farrells name is mentioned in social gatherings it is with the greatest of respect and the fondest of memories for a man who loved Ireland, its traditions and its culture.

Joe Farrell hailed from Lisnacusha, outside the town of Lanesborough. He was one of fourteen children born to Edward (Ned) and Bridget (nee Mc Nally) Farrell, eight of whom survived to adulthood. His parents had lived for a time in Manchester where his mother was employed as a nurse in the Royal Infirmary. They returned home to Lisnacusha in 1914.

Known affectionately as ‘Neds Joe’, he was a man passionate about many things in life but to the fore was his love of family, the land, ploughing, horses, dancing and sporting pursuits.

He married Patsy Doris from Lismore, Newtownforbes and they had a family of four children, three boys and one girl, Ronnie, Paul, Joe and Jacinta. His family life was of paramount importance to him. Himself and Patsy spent fifty nine years together working their farm and raising their family in Lisnacusha. 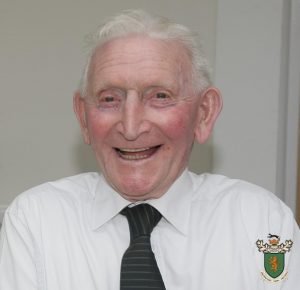 Joe was noted as an excellent ploughman, not only in Longford, but right across the country, having first started ploughing with Irish Draft horses at the age of sixteen. He held a great love and a deep affinity with these amazing animals, describing them as intelligent and docile creatures. This appreciation led to his winning the  Irish Draft Breeders Championship at Ballsbridge in 1976 and twice thereafter. He was a recognised and well respected authority on Irish Draft horses as well as a successful breeder and judge.

He had always held out hope that he would see the National Ploughing Championships take place in Rathcline but unfortunately this never materialised. He was however successful in bringing the Irish Draft national Show to Lanesborough in 1997 and the re establishment of Lanesboroughs’ Traditional Horse Fair in 1999, acting as Chairman for quite a number of years.

Football, shooting and fishing were among the other outdoor sporting activities he enjoyed. As it is with the majority of Irish men in rural communities, football played a hugely important part in his life. Joe was a great GAA supporter and in his time filled the position of fullback for his native Rathcline for fourteen years.

Boxing was another love of Joes, a craft in which he earned himself an esteemed reputation.  Together with Tommy Harold and John Hester he founded the hugely successful Lanesborough Boxing Club in the 1960s. From dancing around the ring to dancing around a hall Joe was light on his feet both in the world of boxing as well as step dancing.

With a reputation as a brilliant dancer he was always stepping it out at the centre of celebrations. Heavily involved in the All Ireland Scór Competitions, Joe won many an accolade for his fancy footwork.

It would seem that there was no end to this mans talents. Being also a lover of music and a great storyteller, he would regale the company at social gatherings with tall tales and merry tunes which related his proud heritage as an Irishman and a O’Farrell.

Not unlike many other Farrells, the issue of politics was always on Joes conversational agenda. He was a Fianna Fáil supporter all his life, serving as chairman of the local Cumann for a time. His interest in politics was no surprise given that his parents too were political. His Mother Bridgit was a courageous, patriotic woman and a proud Republican supporter throughout her life.

She had a reputation for standing up to the brutality of the invading British forces. Committed to the ‘Fight for Freedom’ she played a prominent role in the volunteer movement of Rathcline and Cashel during the war of Independence. She was also responsible for establishing a branch of Cumann na mBann in the area and skills as a nurse made her input in assisting the wounded volunteers invaluable. The night time excursions to Inchcleraun Island to tend the wounded were of course made in secret to protect her,her family and the men.  She left a very important historical mark on her community just as her son Joe has also done, albeit in a different way.

Joes involvement with the Farrell Clan was important to him and brought him great pride. His commitment to and investment in the development and promotion of the clan, was immeasurable. He brought a wealth of expertise, knowledge and skill to the committee and of course he charmed all the Farrells he connected with both at home and abroad, through dancing, storytelling and music.

He filled the role of Clan Chairperson for three years, 1993 – 1996, overseeing in style, the second International Clan rally in 1996.  In July 1995, at the invitation of the Mexican branch of the O’ Farrell Clan, he along with Jimmy, Nuala, Tony, Joe Maguire, clan Chieftan Conal (Connie) and his wife Rose visited the Mexican city of Peubla.

The clan members spent almost two weeks in Mexico, visiting many of the areas most important sites. It was on this visit that Connie laid the foundation stone for the replica of the Farrell Clan Castle. One of the highlights of this trip for Joe was visiting a hacienda owned by a prominent local rancher. He captivated the audience present with his equestrian expertise in pointing out the various merits and faults of some of the horses on the ranch. While the horses proved entertaining unfortunately for Joe the food in Mexico turned out a little too spicy, he only discovering his allergy to chillis while visiting the state. In true Farrell style though, showing courage in battle, never to be defeated, he continued on, dancing, storytelling and charming his way through the celebrations.