If ever a man left an enduring legacy to his family in a love for the Irish landscape, heritage and traditions, it is John Farrell from Graffogue, Ardagh. Born on 12th July 1919 to parents Bill and Marcela (nee Keegan) Farrell, John was one of a family of six, three sisters – Irene, May and Kathleen and two brothers Tommy, and Jimmy Farrell, also a Farrell Clan member since its founding in 1991.

Raised on the family homestead in Ardagh, his love of the land was instilled in him as a youth by his parents.  While farm life in Ireland at that time was typically harsh and opportunities for education were limited, Johns love of farm life, nature and the Irish landscape brought him great joy.

He met his wife, Alice Prunty, when she was teaching in the local national school. They married in 1953, setting up home in Grillagh, a townland situated between the villages of Ardagh and Moydow.  A disciplined strategy and a lot of hard work was required in order to develop and maintain a family farm which could  provide for a family of seven boys and one girl.  This was a task John obviously set to with great enthusiasm given that over the years his farm transformed into a very productive and well managed homestead, on which he produced livestock, potatoes, vegetables and grain. 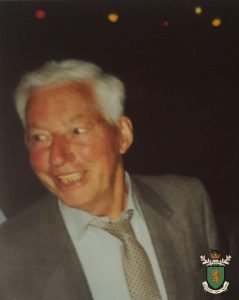 He was progressive in his thinking, adopting modern farming systems to help him achieve his goal. He was aided in the task by his wife Alice and as they grew up, their children, John, Liam, Kevin, Paddy, Seamus, Brendan, Dermot and Fionnuala. Despite the many challenges which the farming lifestyle presented he maintained the tradition and provided well for his family.

While farming was the mainstay of the family, both John and Alice appreciated the benefit of a good education. They worked hard to ensure all of their children were provided the best education possible.

John and Alice were devout Catholics, active in local church and parish activities including running the parish Bazaar, held annually to raise funds for the upkeep of the church. John enjoyed very much the fun role of spinning the wheel and helping the winners choose their prize.  Alongside his cousins Nicky and Barney Halligan, John was also responsible for the beautiful avenue of birch trees leading up to the church in Ardagh. The trees were sourced in Derrymore Bog and planted during the 1970s.

Johns love of nature and trees is something that inspired his family greatly. It is little wonder that they have all carried forward this love of nature in their own lives. Gardeners and landscapers, a water diviner, a creator of willow crafts, storytellers and a poet, people tuned to the seasons and sounds of nature. This is a hugely important part of John Farrells legacy to the world.

During a holiday to Grenada, Spain in 2008 his daughter Fionnuala participated in a tree planting ceremony during which she planted a tree in her parents honour.  There, in a little town called Orgiva, now grows a beautiful tree called ALJO, named for Alice and John.  While her parents may not have known the sunny skies of Orgiva, people from all over the world, including Fionnuala herself, travel regularly to this place and sit under AlJOs canopy, relaxing in the sunshine. She maintains that the energy of the place spoke to her in a way her father would have understood. The trees, a pretty stream, heather for her mother and a mountain in the background,  all reminding her of Ardagh.

Additional to Johns working and spiritual life were his interests in a wide variety of other activities.

It is no surprise that he was a long standing supporter of the Longford County Show, one of the most important agricultural events for farm families in the annual calendar. A member of the organising committee, he would also exhibit his animals and produce as well.

He loved storytelling as well as dancing. Gathering at the fire with neighbours to tell stories is of course one of Irelands greatest traditions and one which was commonplace in the Farrell household as well as the neighbouring homes. Even more important than the storytelling in John’s home was the tradition of dancing on a Sunday afternoon. The old style gramophone would be taken out after Sunday dinner, wound up, and the family would dance. It was in this way John taught his only daughter how to dance. How beautiful a memory that must be to hold in ones heart.

In later years Fionnuala would often attend social events alongside her Father who believed greatly in supporting his community.

Added to the mix was of course a little politics, for you can’t be a Farrell and not have an interest in the political state of the country. John was a dedicated Fine Gael man all his life engaging animatedly in local political discussion. He was always fully clued into both local and national current affairs.

While all of these interests took up his time GAA was Johns main social outlet. He enjoyed sports and was an avid supporter of his local teams. He himself was a good footballer in his youth, winning several medals with his own club and county until a knee injury finished his sporting career. He won Senior League and Championship titles with Ardagh as well as Junior Championships with Moydow.

John and his brother Jimmy were actively involved in the Farrell Clan from its’ founding in 1991. He loved meeting Farrell people from around the world, showing them around Ardagh and discussing his love for the land. Like the rest of the clan,  John had a kind and generous nature. He always had time for people no matter how busy he was. He loved to see people doing well for themselves and took great pride in the achievements of his children. He was a wonderful and loving grandfather, teaching the younger children all he could about the distinct heritage and traditions of the land and bog.

Alice passing in 1994 affected him deeply but he adapted well to living on his own.

He loved his native place and was very proud of his heritage.  He remained busy on the land and connected to it right up until the end of his life. He passed away in October 2000 and bore his final moments with dignity, exactly as he had led his life. The large crowds that gathered at the church to pay respects to his family is testament to a life well lived and a man highly respected in his community.