Behind every great idea we can be sure there is a woman or women of substance. In the case of the modern day Farrell Clan, those women were Margaret Dockery and Mary Kelly, both lived in Roscommon and both heralding from Farrell families. Margaret came from Carlow originally while Mary was a Longford native, her home place being Clonmore, Kilashee. Margaret, an engaging, independent lady  operated the very successful ‘Rampark Guesthouse’ in Castlerea,County Roscommon, for twenty seven years. During this time guests came from all over the world to stay, many of whom were researching their ancestry.  It was in conversation with a Fáilte Ireland representative visiting with her, that she first learned of the Irish Clan Movement and made the inquiry as to whether there was a Farrell Clan already in place. The discovery that there was not, set the wheels in motion for the very first Farrell gathering. The Clans of Ireland initiative was established in 1989 to promote the interests of Irish Clans both at home and abroad, uniting them into a cohesive cultural movement. Margaret’s love of travel, culture and world history, as well as her business interests in the hospitality and tourism industry, were no doubt a driving force behind the idea for a dedicated Farrell Clan. 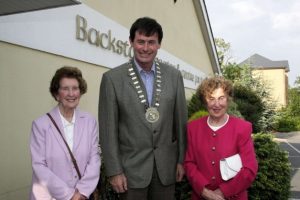 Margaret Dockery & Mary Kelly with the Mayor of Longford, Séan Farrell, at the 2008 Clan Rally.

She proposed the possibility of founding the  Clan to her friend Mary, who agreed it was indeed a good idea. While a little unsure at first whether anyone would find it of interest, or how they would gather people together, the industrious ladies placed an advert in the local Longford newspapers. They also went on local radio, broadcasting their call for a meeting to discuss the feasibility of such an endeavour. Little did they know just how enthusiastically their idea would be received, or how lovingly it would be nurtured into the thriving clan it is today. The venue for the first gathering in November 1991 was the Annaly Hotel in Longford town. The ladies were delighted to be greeted by a very enthusiastic group of Longford Farrell people, and an inspiring evening was had by all who attended. Decisions made on that evening resulted in the establishment of the first Farrell Clan committee, a series of gatherings and fundraising events, the first ever International Farrell Clan Rally in 1993 and the election of Conal O’Ferrall as Clan Chieftan. Neither Margaret or Mary ever took a seat on the committee as they believed they lived too far away for it to be feasible. They have however remained constant supporters of the clan over the past 25 years, attending all the rallies as well as many other events. Margaret also accompanied a Farrell Clan delegation led by Chieftan Connie and his wife Rose to Mexico on a visit to the official opening of the ‘Longford Castle’,  built by the Mexican branch of the O’Farrells, in 2000. I think it can be said that the clan will be forever indebted to their vision.