IN THE PLANTATION of James I, a grant was made in 1620 to Keadagh MacConnell O’Ferrall of the lands of Camliskmore and Camliskbeg, adjacen 11Mullinora,” 113 ac., I.P.M., at a Crown rent of 2½d. per acre. The lands were already in possession of the O’Ferrall family form time immimorial. 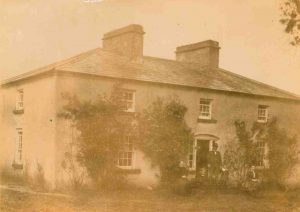 Keadagh’s father Conal lived in the latter half of the sixteenth century. LETTERS patent of these lands confirming the grant were issued in 1632 by the English ruling authorities, to Conal O’Ferrall of Camlisk, son and heir of Keadagh, (An abstract and memorial of these letters was found in the court records in 1841, and a copy of it made by the late Mr. J. E. O’Ferrall, solr. – a member of the Corbeagh family). This Conal was the “Papist proprieter” of Camlisk in 1657. His son and heir was Mark and Mark’s son and heir was Gerald. Mark died in 1702.

In a petition presented to the Court of Exchequer in 1709 by Gerald O’Ferrall of Camlisk, son of Mark, son of Conal, against Theophilus Jones and others it is recited that Gerald’s grandfather Conal of Camblisk (to whom the Letters Patent were issued in 1932), was seised in fee of the lands of Camlisk 103ac [ ? 113 ]. Irish Plantation Measure and on April 30, 1641, did convey and mortgage the said lands for the sum of £110 for the use of Gerald O’Ferrall, son of Keadagh of Ballintempan, with the right of redemption. (The Ballintempan family must have been close relations of the Camblisk family).

This Gerald of Ballintempan was supposed to be in some way concerned in the “Rebellion” of 1641, and his lands were confiscated and subsequently vested in the Crown by the Acts of the Settlement and Explanation, but he made a claim before the Court of Claims in 1663, and succeeded in showing that he was an “Innocent Papist” – that is that he had not been engaged in the troubles of 1641 (he was in 1641 only about 8 years of age). His claim was allowed and his lands of Ballintempan and others were restored.

Conal O’Ferrall, then (1663) as owner of Camlisk, to whom the right of redemption of the mortgage belonged, was also decreed an “Innocent Papist.” He died soon after, and his rights passed to his son and heir Mark, who paid off the mortgage on Camlisk to Gerald of Ballintempan, and Gerald reassigned the lands of Camlisk to Mark.

In the troubled times following 1690, Mark, being in fear of confiscation of his lands, applied to Theophilus Jones (son of Walter Jones), a Protestant friend, to take his (Mark’s) lands under his (Jones) protection, and Jones knowing of the friendship between his deceased father Walter and Mark agreed to do so, and accordingly a lease of the lands of Camlisk was made by Mark to Jones.

When all danger was over Mark applied to Jones to determine the lease and restore the legal title of the lands, but some legal difficulties were raised. Mark died in 1702 and was succeeded by his son and heir Gerald, who, in 1709, filed the bill in the Court of Exchequer against Jones and others for the restoration of  his lands.

This dispute was finally settled by arbitration in 1718, and the lands of Camlisk were restored to Gerald by Jones by deed of conveyance. (From this Bill and this conveyance this record has been abstracted).

Gerald married in 1693, Mary–? He had two sons Conal of Camblisk, and John who became a Doctor of Physic and settled in Jervis St. Dublin, and, as it would appear, became at any rate nominally a Protestant.

Conal, elder son of Gerald, (born in 1695), dwelt at Camlisk, married Brigid …and had two sons Mathias and James. Mathias bought part of the lands of Alfeed (Cashel)from Count Thomas Newcomen of Drumming House Ardagh, in about 1766. He died about 1793 unmarried, leaving his only brother James his heir-at-law who sold these lands of Alfeed in 1797. James had a son, Conal, born about 1773 and a daughter who married Joseph Flood of Dundalk. James died in 1804

Conal (son of James), married Elinor O’Ferrall, whose father had settled in Dublin and had a family of nine sons and three daughters. He was the owner of Camlisk in 1841 when part of the lands were sold to James Rhatigan of Edgewothstown.

The deed of conveyance sets out that Conal O Ferrall of Camlisk was seised in fee simple of the said lands and that the said Conal, and James (his father) and their ancestors have been from time immemeorial in the uninterrupted possession and enjoyment of the said lands of Camblisk by virtue of the original grant thereof from the crown, a statement which was legally and historically true. (Meaning Lands were not used for purpose)

Conal made his will in 1843 settling his lands to his second son John, with remainders to several other sons. He built the present house in Camlisk. He died in 1858 aged 85. Several of his younger sons went abroad. John had died in 1854 before his father.

The second in remainder was the seventh son Conal, who sold the rights to his youngest brother Mark, who thus came into possession of Camlisk. Conals widow lived till 1867 or later. Mark was born in 1834. He had three sons, Conal, Paterick and Mark and three daughters, Teresa, Mary Ellen and Annastasia. Teresa and Mark died young.

Conal of Camlisk married Brigid O Reilly of Granard. They had tow children, Conal John and Helena. Helena lived moved to when she was 20yrs and took up nursing. She made frequent visits home, she died 20th Jan 1973 aged 65. Paterick had two children, Mark and Noreen and he died in England 6th Jan 1947 aged 76.

Charlotte, married and divorsed, has 1 son, Brian Robert, they live in Edgeworthstown Co. Longford. Suzanne, married Pierre Delannoy, she has 1 stepchild (Pierre’s Son Leon. and also lives in Co. Longford. Roderick the youngest boy is the next heir to Camlisk; so that the ownership of these lands has come down in direct succession from father to son for over three hundred years.

Mr Conal O’Ferrall is in possession of some old legal documents, including a copy of the petition of Gerald of Ballintempan to the Court of Claims in 1663, and a copy of the Bill in the Court of Exchequer against Jones by Gerald of Cambisk in 1709; from which the information in this paper has been abstracted. He is the only representative of the Clann O Fearghail who is still by direct and unbroken inheritance in possession of some of the lands owned by his ancestors in the sixteenth century and earlier: the residuary legatee of twenty generations.

John Ferrall (son of Gerald), Doctor of Physic, who lived between 1698 and 1779, dropped the O from his name, and it appears became nominally a Protestant. In 1751 he was described as ‘the son of Popish parents and had never regularly conformed to the Protestant religion’. He married a woman named Elizabeth Chamney and had eight children, four of whom died young and were buried in Drumcondra churchyard, Dublin.

One son, Edward, survived him but died unmarried in 1787. He had three daughters; the eldest, Mary, married Alexander Burrowes, who had some connection with County Longford as his name is found in the Grand Jury Lists in 1769 and later years; the second, Elizabeth married a Major Cosby of Dublin; -and the third, Catherine, married Lieut Col. Hugh Lyle Carmichael of Carlow, of the 94th regiment, afterwards Major General and a Knight. Dr. John Ferrall acquired by purchase various lands in Co. Longford including Ballinree, Ballymoat, and Garryconnell, and also Curraghlaragh, alias Corelaragh, which latter he bought from the representatives of one Richard O’Ferrall. He had several mortgages on the lands of Cam1isk, then in possession of his brother Conal, and later of his nephew James.

He owned lands in Co. Roscommon as well. He made his will in 1778 settling his lands on his son with successive remainders to his three daughters, and final remainder to his nephew James of Camblisk. He left £1500 to each of his daughters, and directed that he should be buried in Drumcondra. The various mortgages were all acquired by his second daughter, Mrs. Cosby, and were finally paid off in 1841 by Conal O’Ferrall of Camblisk, son of James. Mrs. Cosby was living in 1841 and later.

After the death of Mrs. Cosby without heirs he succeeded to the estates of Dr. John Ferrall, and in 1852, under the will of the latter, assumed the name of Carmichael-Ferrall. His son was John Carmichael-Ferrall of Augher, whose son is the present representative, and is sixth in descent from Gerald O’Ferrall of Camblisk who lived about 1660-1730.

Mr. Conal O’Ferrall, now of Camblisk, is sixth in descent from Gerald. The family burial ground of the O’Ferralls of Camblisk is in the old graveyard of Meathus Truim, now called Edgeworthsown, where tombstones dating back nearly 300 years may still be seen.

The family coat of arms carved on these stones shows the lion rampant of the O’Ferralls, with three fleurs de lys in the base of the shield. The crest is a right hand,. and the motto is “Cor et Manus Concordant” – “Heart and hand agree”. In the mortgage deeds of 1720 and later the name is written Camblisk, a more acceptable form than Camlisk, the form adopted _by O’Donovan for the Ordnance Survey. – S. F. o C. – From the files of the Longford Leader 1927