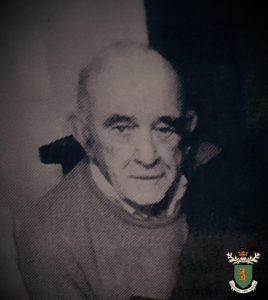 Tom Farrell was known affectionately as ‘The Bullockstown Boy’ in reference to the townland from whence he came. He was a committed member and great supporter of the Farrell Clan Committee over the years, never missing a clan meeting.

In addition to his support for the clan, Tom also had political interests and aspirations. Already the proud holder of the title ‘King of the Shannon’, bestowed upon him as a result of a local voting competition, he decided to run as an Independent candidate in the 1985 Local Elections. He had hoped to claim a seat in the Ballymahon electoral area but although he polled 234 votes, he lost out on that particular occasion.

Tom was known for his beautifully maintained traditional farmhouse near Rathcline Castle. Such was its allure that visitors to the area always stopped to take photographs. It is a curiosity that he could maintain it so well given that he also kept prize winning goats. In the 70s and 80s Toms goats won many accolades at the Longford County Show and Country Fair.

While we know only a little of Tom’s personal life and times we do know that he was a proud Farrell, delighted to be part of the local clan and eager to help promote it both at home and abroad. 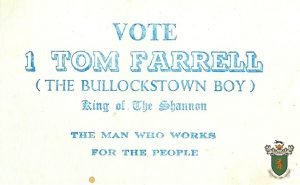